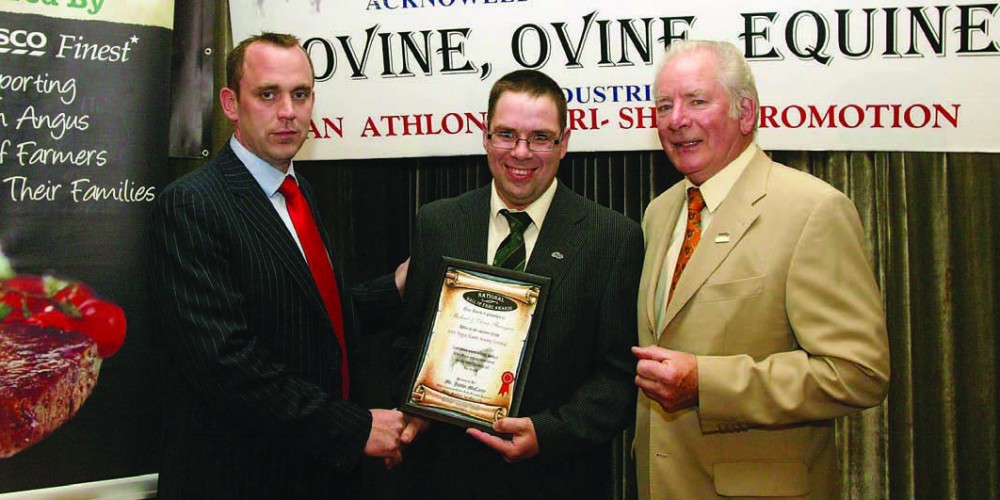 MICHAEL FLANAGAN was born and reared in Moylaw, near Crossmolina, Co.Mayo. His father, John Flanagan, was a well known Angus breeder. He also kept three Department of Agriculture Premium bulls, one Angus, one Shorthorn and a Hereford. After leaving school Michael worked with the Department of Agriculture before spending ten years working as a showband manager. He then went into business in Athlone and purchased Moydrum castle and the land attached to it.

Michael and Oliver Flanagan are presented with the National Hall of Fame award by Justin McCarthy (Irish Farmers Journal).

Michael purchased his first pedigree Angus from Cathal Duignan at the Carrick-on-Shannon sales. Laheens Betty was sired by Doonally Jumbo. She cost 600gns at ten months. His other foundation female was Prim of Moynehall, purchased in Co.Cavan form the famous Harry Foster. Laheens Betty bred Moydrum Lady Heather, sired by Perryville Roscoe which went on to win 36 championships. Moynehall Prim bred Moydrum Pavorotti, which was sold to John O’Brien of Ballymacoda for £6,000. Michael’s present herd is descended from these two females. Oliver does most of the feeding and looking after the cattle. 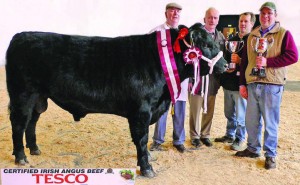 He is as passionate about his cattle as Michael. For a while they bred Charolais, Hereford and Highland before deciding to concentrate on Angus and beef Shorthorn. They are very proud of Moydrum Castle King, the Shorthorn they sold to Sligo A1. He has the highest figures of all the Shorthorns on the ICBF list.

Michael and Oliver have twice shown the Champion Angus at Kilkenny Bull Show and Sale. They had the best pair of bulls at Carrick once. Moydrum Lady Heather won the Junior Championship at Strokestown and the following year she won the Senior title. She later sold for £6,000. Michael and Oliver are familiar faces at most of the shows in the West and Midlands. 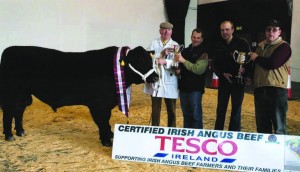 Michael worked as Chairman of Athlone Show for nine years. He became President in 2011. Oliver was Honorary Secretary of the same show for many years. Michael gave at least ten years as a member of the Irish Angus Council. In all that time he acted as PRO for the Society, where he did a superb job in spreading the message about the qualities of Angus cattle. At one time he made a record about the Aberdeen Angus. Michael was a founder member of the Irish Angus Producer Group and still sits on the board. He is also a regular at the Perth/Stirling Bull Sales and he represented Ireland at the World Angus Congress in Cape Town in 2006. 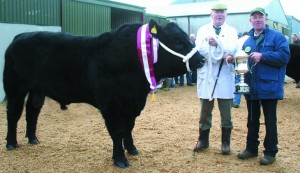 Michael sees a huge future for Angus cattle. The Russian market is taking a lot of our surplus females. He believes that 2012 should be labelled ‘the year of the Angus’. The Producer Group is killing 700- 800 cattle per week. He believes that the launch of the ‘Roadmap to Profitable Beef Production’ at the Ploughing Championships in Athy in September 2011 was a major step forward for Irish Angus cattle. A premium of up to €160 can be obtained for the very best cattle. Michael, his wife Pat, and Oliver live in Moydrum, while Michelle works with European Rugby (ERC) in Dublin. Oliver runs a very profitable free range egg business. He has about forty regular customers. All the Flanagans support Garrycastle GAA Club. 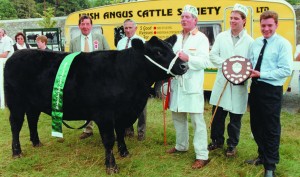 Finally, Michael and Oliver were truly deserving winners of the “Hall of Fame Award” for the Angus breed in 2011.